The “Deutsche Ausrüstungswerke GmbH”, which was owned by the SS, acquired the “Forst- und Sägewerksbetriebe GmbH, Bachmanning” in early 1942. The initial plan was to use prisoners for work in the production of wood frames for windows and lockers. Bachmanning Subcamp appears for only one single day as an independent subcamp to former Mauthausen Concentration Camp in the registries. As of 15 September 1943, it was listed as being under sub-command of Großraming Subcamp. On that day, the number of prisoners at Großraming Concentration Camp was raised from 918 to 937 in the documents of the camp administration.

The prisoners were used to work in a sawmill and to work in the production of wood frames and lockers. The products were intended for housing developments in the occupied territories in Eastern Europe.

To date, there is no information on the guard of the camp.

The prisoners’ personal data cards of two Polish prisoners show “Bachmanning” as their assignments between 13 September 1943 until 25 and 28 August 1944. For this reason, it can be assumed that Bachmanning Subcamp was shut down at the same time as Großraming Subcamp.

The following prisoners of Bachmanning Subcamp are listed on a memorial plaque that was put up at Bachmanning town hall in June 2011: Sinti family Rosenfels-Jungwirth, resistance fighter Alois Steiner as well as Paul and Wladimir (children of forced labourers from Poland and Ukraine). The local branch of the Mauthausen Committee Austria organises regular memorial ceremonies [1] in Bachmanning. 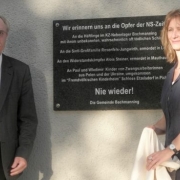 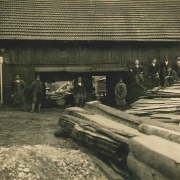 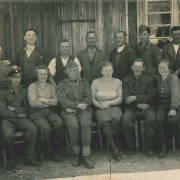 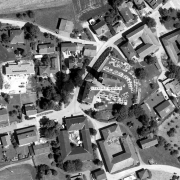