Research station and construction of an underwater power plant.

In 1939, the city of Passau acquired the Oberilzmühle (mill), in order to build a hydraulic power station in addition to the existing Ilz power plant in Hals. In May 1942, the project was handed over to the “Arno-Fischer Forschungsstätte” (Research station), who was planning on building a so-called underwater power plant under the supervision of Arno Fischer. On 19 October 1942, Passau I - Oberilzmühle Subcamp was established as a subcamp to Dachau Concentration Camp, and about one month after that, Mauthausen Concentration Camp took over its management.

The construction site and the camp were about 5 km north of Passau, near the river Ilz; finding the exact location of the camp today is no longer possible.

When Passau I was established, 24 prisoners that were predominantly categorised as “political prisoners” and had been moved to Passau from Dachau were detained there. This group was replaced in 1943 by 70-80 prisoners from Mauthausen Concentration Camp. They came mainly from Poland, but also Spain, Czechoslovakia, German, the Soviet Union, and Austria. In September 1944, 70 male prisoners were at the camp. In February 1945, 50 prisoners were transferred to Mauthausen Concentration Camp.

The guards were eight, and later fifteen, SS soldiers. Violence and severe physical abuse by the guards were very common at Passau I; the deaths of (at least) four prisoners are documented.

The camp was shut down by the camp leader shortly before the arrival of the US Army. On 2 May 1945, the US Army found the prisoners, who had been left to their own devices, at the camp.

After the war, the unfinished underwater power plant was converted into a conventional hydraulic power station. A memorial plaque was mounted to the dam wall. 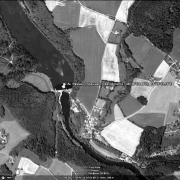 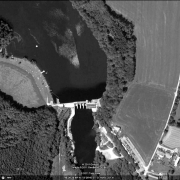