Set-up of the camp, road construction, forestry, and wood processing

St. Aegyd Subcamp was established on 2 November 1944. At that point, the first transport with 300 prisoners arrived from Mauthausen Concentration Camp by train. The establishment of this subcamp was commissioned by the automotive school of the Waffen-SS (KTL Vienna), which had their headquarters in the Fasangarten military barracks in Wien-Schönbrunn. The purpose of the camp was to set up a test bench for the alternative engine technologies for tanks developed by the KTL Wien. In that way, St. Aegyd Subcamp was also operated under the name “Kraftfahrtechnische Versuchsanstalt der Waffen-SS (KVA)” (Automotive research station of the Waffen-SS). In reality, however, the prisoners mostly worked on setting up the camp; the implementation of the intended purpose never happened as the war ended before it came to that.

St. Aegyd am Neuwalde Subcamp was set up in an open meadow on a hill above the town centre. The plot of land was owned by the Catholic church and was seized in 1944. The prisoners were separated into work detachments to collect construction materials for the establishment of the camp (wood, gravel etc.). Apart from the two prisoners’ barracks, there were another two smaller barracks which housed a bathroom and an outhouse. Right outside the barbed wire fence, there were several buildings owned by the SS construction management; a kitchen barrack, a woodwork barrack, a troop barrack as well as makeshift barracks for ethnic German refugees from Eastern Europe. The access road today, called Pfarrsiedlung, is vaguely the same as the former camp road that led up to the protective custody prisoner camp.

Between November 1944 and late March 1945, a total of 497 prisoners were detained at St. Aegyd Subcamp for some amount of time. They came from 18 different countries. The majority of the prisoners were “protective custody prisoners” from Poland. Other large groups were RZAs (Russian Civil Workers), prisoners from the Soviet Union, Italian, and Yugoslavian protective custody prisoners. According to current knowledge, 46 people lost their lives at the camp.

The prisoners were assigned to work on the establishment of the camp and had to carry out forced labour in numerous different work detachments. They also worked in road construction, forestry, and wood processing. The working and imprisonment conditions were extremely harsh, the guards utterly violent. After only two months, more than half of the prisoners were classified as unable to work. More than 140 prisoners were transferred back to Mauthausen Concentration Camp.

SS-Oberscharführer (Senior Squad Leader) Willi Auerswald was camp leader of the protective custody prisoner camp in St. Aegyd; Anton Perschl was Rapportführer (Report Leader). Both had to answer for their crimes during the post-war trials - Auerswald in Dachau during the Mauthausen trials, and Perschl at the People’s Court in Vienna. The guard detail at St. Aegyd Subcamp consisted of around 40 to 50 men. Most of the guards were “ethnic Germans” recruited from Eastern and South-Eastern Europe. The SS guards stayed in the primary school in St. Aegyd, which had been seized.

St. Aegyd am Neuwalde Subcamp was evacuated on 1 April 1945, at the same time as all subcamps in the greater Vienna area. The 301 prisoners were loaded onto railway carriages that day and transported to Mauthausen. The transport took four days and only small parts of it were made by train. The prisoners had to march most of the way; and they spent one night at the Krems/Stein prison. During the evacuation, four prisoners lost their lives.

After the war, all barracks were torn down and sold by the town; a few years later, the entire plot of land was divided into building plots and sold to families. Today, the land is called “Pfarrsiedlung”, and is a housing development. In 1945, a memorial cross was erected in an area of the catholic cemetery demarcated by a hedge (behind the chapel). In 1988, a memorial stone and a plaque were added that read “80 unknown Concentration Camp victims of the war 1940-1945”. An audio installation was added in 2010, which replays the names of the 46 known victims (recorded by the locals of St. Aegyd). In 2016, the plaque was removed - as it contained errors - and replaced by a new one with the following inscription: “In memory of the victims of the NS terror at St. Aegyd am Neuwalde Subcamp. November 44 - April 45” There are signs leading to the cemetery of the camp. The “Gedenkinitiative KZ-Außenlager St. Aegyd am Neuwalde (GISTA)” [1] (memorial initiative St. Aegyd Subcamp) organises annual memorial celebrations and also works on the reappraisal of the history of the camp as well as on concrete commemorative work on site. The relevant dates for the commemoration celebrations can be found in the programme [2] of the Mauthausen Committee Austria. 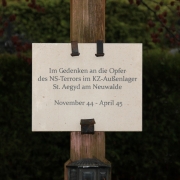 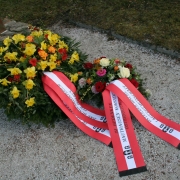 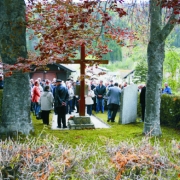 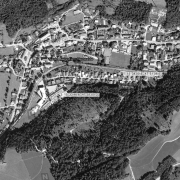 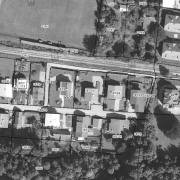