In March 1943, the iron hull of the factory hall was completed, and a topping out ceremony was held, with “prominent Nazis” present. Despite being not quite completed, the so-called “Serbenhalle” was immediately equipped with a heavy-current electric barbed wire fence. The following summer, the northern half was completed, and on 20 June 1943, the first Wiener Neustadt Subcamp was “inaugurated” with a first prisoner transport. After an air raid a few months later - on 20 November 1943 - it was closed down. The second time, prisoners arrived at Wiener Neustadt Subcamp on 5 July 1944. In April that year, the use of forced-labour prisoners in Wiener Neustadt was once again authorised.

The prisoners were lodged in an extension of the “Serbenhalle” both times. The name of the factory hall is due to the fact that, in 1942, the large assembly hall in Kraljevo (Serbia) was demounted and brought to Wiener Neustadt via train in 400 freight cars and restored in Wiener Neustadt. One year prior, members of the NS randomly shot 1,736 captured inhabitants of Kraljevo in that hall, as retaliation for insured NS soldiers.

The prisoners worked mainly on the preparation for the production of missiles and rockets. In early October 1943, the final assembly was underway, even though the Raxwerk had been bombed twice. On 13 August 1943, the first air raid on Wiener Neustadt occurred. As the city was considered the centre of the aircraft industry, it was a strategic target of the American Air Force.
Following the air raid, the machines and production parts were brought to Thüringen in a hurry. There, prisoners from Buchenwald Concentration Camp had to set up “Dora” subcamp. 375 prisoners were brought to this new camp from Raxwerk Concentration Camp, and more than 800 were brought to an underground facility. After the cessation of the rocket production, Raxwerk was commissioned with the production of MAL-vessels for the war navy. Between 5 July 1944 and 1 April 1945, prisoners had to do clean-up work after bombings and work in the production of the MAL and MAT landing crafts.

The first subcamp was shut down on 20 November 1943 and the prisoners were brought to Buchenwald Concentration Camp. In March 1945, the Red Army was approaching Wiener Neustadt. It was likely in the late afternoon of 30 March that the SS guards started the evacuation of Wiener Neustadt Subcamp and sent the prisoners on a death march. Some prisoners managed to escape, but many lost their lives. The approximately 540 prisoners were accompanied by 50 to 60 Marine soldiers. They had to march between 25 and 30 km every day. On 9 April, the column reached Steyr Subcamp. 200 prisoners of Wiener Neustadt Subcamp were brought to Gusen Subcamp on 30 April 1945, where they were liberated at the end of the war.

In 2005, the Wiener Neustädter Verein Alltag Verlag [1] erected a monument, designed by Markus Grabenöwöger and Michael Rosecker. The monument is right next to the preserved “Serbenhalle”. A guard bunker is also preserved and can be found in the parking lot of a shopping centre in Stadionstraße. Moreover, the locomotive “Fanny”, which used to operate on the premises, can be found in Pottendorfer Straße. The monument next to it, a metal wreath reminds us to “Never Forget”. 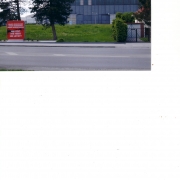 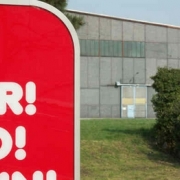 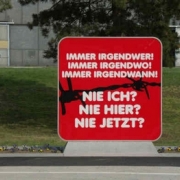 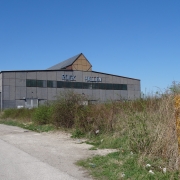 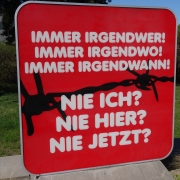 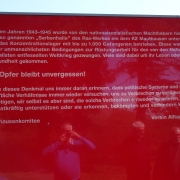 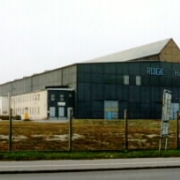 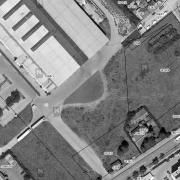 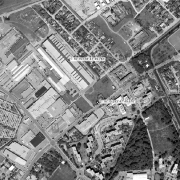