The prisoner barrack of Klagenfurt-Lendorf Subcamp was on the premises of the SS military barracks Lendorf. It is said that there was only one single barrack for the prisoners, and one barrack for the SS guards, which was, however, located outside the premises. The prisoner barrack also housed a typist’s room and a sickbay. The barrack was close to the workshop building and was circumscribed by a barbed wire fence (not an electric one) and two watchtowers, which were located outside the fence.

The highest number of prisoners at the camp was 130, in the time between 31 August and 31 December 1944. The transport lists from Mauthausen Concentration Camp confirm that occupancy ranged between 80 and 130 prisoners. The prisoners that came to Klagenfurt-Lendorf Subcamp from Mauthausen were, for the most part, from Germany, Austria, Czech Republic, Poland, Italy, Russia, Spain, France, and Yugoslavia. It looks like there were no prisoners among them who were classified as “criminals”, but only “political” prisoners. The Austrians, Germans, and Spaniards were used as Kapos (prisoner functionaries).

The prisoners at Klagenfurt-Lendorf Subcamp were forced to work on the construction of barracks for SS Junkers and their horses, two air-raid shelters (below Koglsiedlung) as well as on the construction of a fire fighting pond and a swimming pool. Moreover, they did repair works after bombings, mainly on the premises of Klagenfurt train station. In his report, August Walzl mentions (2001, p. 54) that the prisoners were also used to transport coal and gravel. There is also at least one report about a case where prisoners had to do excavation work in an air-raid tunnel outside Klagenfurt.

15 SS guards, one officer, and 14 SS watchmen from Mauthausen Concentration Camp were assigned to the guard of Klagenfurt-Lendorf Subcamp. This was, at any rate, the status for the period between 19 March and 30 April 1945.

The deviating reports until the shut-down of Klagenfurt-Lendorf Subcamp are indicative of the chaos towards the end of the war. One large prisoner transport was apparently sent to Dachau Concentration Camp in April 1945. The remaining prisoners were assigned to demolish the prisoner barrack and the SS guard barrack by 6 May 1945. As it was no longer possible to transfer prisoners back to Mauthausen Concentration Camp, the prisoners were brought to Loibl Süd Subcamp via lorry on 7 May 1945. Survivors’ reports show that there was an order out of Mauthausen to kill all prisoners before they fell into the hands of the allied forces. The commander of the Junkerschule refused that order. At Loibl Süd Subcamp, the prisoners from Yugoslavia were released, and a group of Austrian and German prisoners was brought back to the Lendorf military barrack. There, too, the SS did what had become quite common and release the prisoners (especially Germans and Austrians) only to put them in Wehrmacht uniforms to incorporate them into the SS once it became clear that the allied troops were approaching. This group was released by the British troops. Another group of prisoners (from Poland, France, and Luxembourg among other countries) was used as a live “shield” to protect the guards from the partisans on their way through the Loibl tunnel. In the Carinthian Rosental valley, those prisoners were freed by the partisans.

After the liberation, the military barrack was used by the British occupying forces, and after 1955 it was used by the Austrian Armed Forces. No major structural changes have been made ever since. In place of the burned down SS gymnasium, an army church was built, and where the SS horse stables used to be, there is now the museum of the garrison. It was not until 2007 that, upon initiative of the Mauthausen Committee Carinthia/Koroška [1], a memorial plaque was put up near the military barrack. The dates for the memorial celebrations can be found on the website of the Mauthausen Committee Austria [2]. 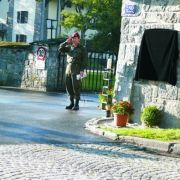 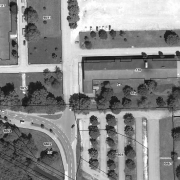