Set-up of the camp, production of ball bearings and aircraft engines, road construction, construction of cellars and bunkers

As early as in the years between 1938 and 1940, there were close relations between the concentration camps of Mauthausen and Steyr. Before a crematorium was built in Mauthausen, the prisoners murdered there were cremated at the Steyr city crematorium. Steyr-Münichholz Subcamp was established on 14 March 1942 and was one of the first subcamps serving the German arms industry.

Steyr-Münichholz Subcamp was located on the plot of land to the right of what is Haagerstraße today.

Prisoners were mainly from Spain, France, Poland, Italy, Greece, Russia, and Czech Republic, but also from other countries. Between 1,000 and 2,000 prisoners were detained at the camp. The maximum number of prisoners was reached in April 1945 with 3,090 persons detained at once as several evacuation marches from Wiener Neustadt Concentration Camp led through Steyr. The working and living conditions at Steyr-Münichholz Subcamp were very harsh. On top of that, the air raids targeting the Steyr Works in February and in April 1944 also claimed numerous victims. The names of 226 prisoners can be found in the incineration records of the city of Steyr. Their last place of residence was Steyr-Münichholz Subcamp and they were cremated at the Steyr city crematorium. Normally, sick prisoners were returned to the Stalag and executed there. The exact number of victims at Steyr-Münichholz Subcamp is still unknown.

The prisoners coming from Mauthausen Concentration Camp had to carry out work for the arms industry in the Steyr Works. They also had to build roads and air-raid shelters for the city of Steyr.

A total of 146 SS guards were present at Steyr-Münichholz Subcamp, mainly Romanians, Croats, Hungarians, but also others, for instance locals from Steyr. Otto Heess, a German from Pforzheim, was camp commander. SS-Scharführer (Squad Leader) and medical orderly Gottlieb Muzikant was especially brutal. He was given 21 life sentences for murdering 20 people, but he was not the only sadist in the camp. The People’s Court proceedings show numerous examples.

On 5 May 1945, American troops liberated the camp. In 1948, the ashes of the prisoners were buried at the Steyr cremation cemetery. There is also a memorial stone on the cemetery, which reads “Niemals vergessen” (Never forget). In 1953, the “Amicale de Mauthausen” and the Concentration Camp Association of Steyr erected a memorial stone near the premises of the former camp.

In 1953, the Amical de Mauthausen, an association of French survivors within the network of the Comité International de Mauthausen, erected a monument at the location of the former camp. The annual liberation celebration also takes place on the premises of the former camp. The exact date can be found in the programme for commemoration and liberation ceremonies [1]. More memorial stones and plaques can be found at the cremation cemetery, at the Jewish cemetery, near the former synagogue of the city of Steyr, and by the Friedrich-Uprimmy-Stiege. Another memorial plaque can be found on the wall of the BRG Steyr high school (Michaelerplatz 6). A permanent exhibition about the concentration camps and forced labour is open to visitors inside the “Stollen der Erinnerung” (Tunnel of remembrance) in Steyr city centre. 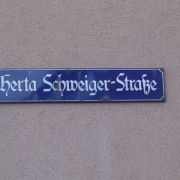 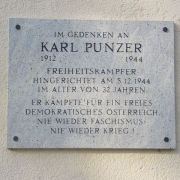 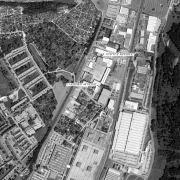 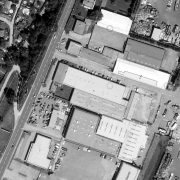 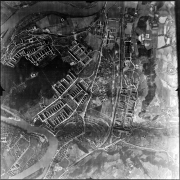